Banking sector to benefit from package

BANKING SECTOR TO BENEFIT FROM PACKAGE

But loans quality still under threat as unemployment inches up

These schemes will limit banks' risk exposure to only 20% of new loans, while the balance 80% will be covered by a government guarantee. Both schemes started on March 16 and will end on Dec 31, 2010 or until the entire RM5bil + RM5bil allocation has been exhausted. The schemes are applicable for new loans, and are not for refinancing of existing credit facilities.

The government guarantee will come from Prokhas Sdn Bhd, which is 100%-owned by the Government. All commercial, Islamic and development banks will ink agreements with Prokhas for the guarantee.

Meanwhile, the onus of approving new loans and determining interests rates of the loans continue to rest solely on the banks. This is positive, as it will allow individual banks to work within their risk appetites and risk management frameworks for the new loans.

This structure also ensures that loan approvals remain a business decision, and avoids the classic "moral hazard" and "adverse selection" economic/banking problems which would arise if the decisions lay with the Government instead. Moreover, the Government does not have the capacity or capability to undertake such decisions.

The WCGS would help viable SMEs with strong operational capabilities to remain afloat through this difficult period. 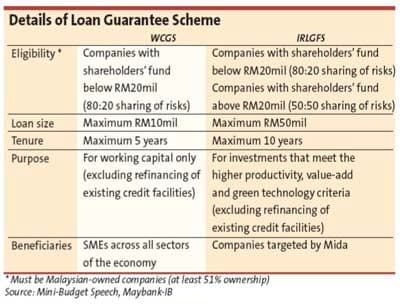 Meanwhile, the IRLGFS would provide catalysts for companies to undertake the necessary restructuring that would lift the economy to higher technology application, productivity and value-add, and to promote green technology.

Maybank-IB expects banks to fully disburse the entire RM5bil + RM5bil, which should give a 1.4% growth to banking system loans (RM728bil as at January). With the government guarantee in place, banks' risk exposure will be up to only 20% of loan defaults – RM2bil in the worst case scenario, or 5.7% of system non-performing loans (NPLs: RM34.9bil as at January).

This implies a maximum loss of RM2bil for the system if all loans have to be written off (versus the banking system's pre-tax profit of RM19.3bil in 2008).

Meanwhile, claims by banks to Prokhas (for loan defaults) would be paid within 30 days. Subsequent loan recoveries will be managed by the banks, and amounts recovered will be shared on the same risk-sharing basis with Prokhas.

These two guarantee schemes are the first of the mini budget measures to be implemented. The effectiveness of the schemes should be apparent from the trend in banking system loan approvals from April. To note, year-on-year monthly loan approvals have been falling continuously since September 2008 up to January (the latest available data), mainly due to the drop in the approvals for business loans (including SMEs).

We continue to underweight the banks. The major banks (except BCHB) have lost 15%-18% in market capitalisation (as at March 13) since we downgraded our call on the banking sector from "neutral" on March 4, on rising NPL concerns and expectations of more negative economic newsflow.

In addition, potential equity cash calls to boost core capital ratios in the event of a protracted economic downturn are another concern. BCHB has lost 5% of its value, while the relatively smaller banks were down by 2%-3%.

While the banking sector should benefit from measures under the RM60bil stimulus package, which may cushion rising loan defaults, larger issues dominate. Loans quality is still under threat as unemployment inches upwards, while the global downturn also has serious implications on businesses.