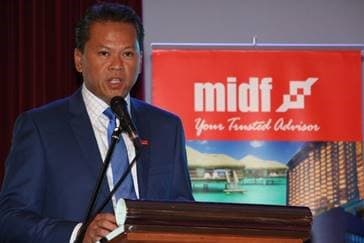 SJPP, which is owned by Minister of Finance Incorporated, guarantees loans given out by development banks such as MIDF to small and medium enterprises.

“Out of the RM800 million allocation for SMEs, we have already disbursed RM400 million,” he said.

Azizi was speaking to reporters here today after MIDF signed a master agreement with SJPP on guaranteeing loans for SMEs.

Todate, he said, more than 13,000 SMEs had benefited from SJPP role in guaranteeing loans disbursed by development banks.

Asked on the impact of ongoing trade war between the US and China on businesses in Malaysia, Darell said: “We want to hear what is the US’ position on various matters before we announce our’s.

“Prime Minister Tun Dr Mahathir Mohamad may give his advice to (he US Secretary of State Mike) Pompeo concerning the trade war,” Darell added.

Pompeo made stopover in Kuala Lumpur today, as he plans to attend an Asean forum in Singapore this weekend.

It was reported that during his two-day stay here, Pompeo will discuss trade and security in his meetings with Malaysian ministers.